During the last CitizenCon, CR announced the Pyro system for 2020, but he also said that he was not sure that server meshing will be implemented by the end of 2020, and in the last panel we can see “a bigger universe “with the image of a jump point after the server meshing.

My question is, is it possible to implement Pyro without server meshing ?

As I understand it, SOCS does not relieve the server load from the moment all the players are dispersed in the universe (which is always the case).

If the introduction of SOCS is a prerequisite for server meshing and makes life easier for the developers who no longer have to load the whole universe every time they works on something, servers tickrate has not changed and is still below 10 fps.

Under these conditions is it possible for the servers to support the introduction of an additional solar system, with players who will be distributed between all the locations of Stanton + Pyro, without being at 1 fps ?

Will we have to wait for server meshing to finally see the server tickrate reaching 30 fps ?

Or is there any other improvements planned before server meshing to be able to increase fluidity and decrease server load ? 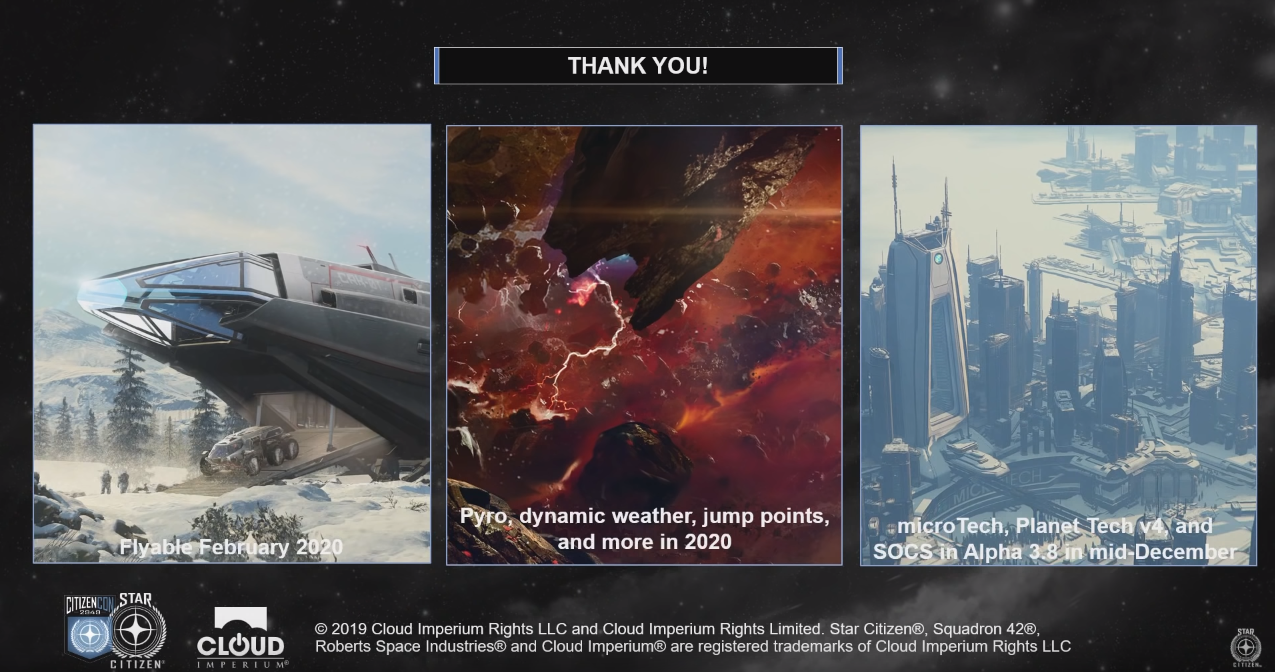 Let me preface what I’m about to say with a giant disclaimer. Nothing I say here is definitive about how things will work or whether this is what we’re working on right now, I’m just demonstrating that there’s a range of possibilities. Also I’m not at all commenting on the timing of any release or dates.

My question is, is it possible to implement Pyro without server meshing ?

Depends on how we want it to work. We could implement it without server meshing by making it a different location you connect to in the front end that’s isolated from the stanton instance. However, if we wanted it to work in game we can still be clever about what level of server meshing we need to support. It may be possible to consider a simpler initial version of meshing where different solar systems are run on different servers and you use the jump point as an explicit transition point. This would mean we wouldn’t have to solve the server meshing problems, but would be an incremental step towards the final goal.

Under these conditions is it possible for the servers to support the introduction of an additional solar system, with players who will be distributed between all the locations of Stanton + Pyro, without being at 1 fps ?

As I always say, you have to profile. My guess is that adding an entire system would cause some serious performance challenges that are probably prohibitive with investing time in optimization, and even then it’s unclear, we’d need to know what the bottlenecks were and how feasible the optimizations would be given the demand on the schedule, weighted against other priorities etc…..

Will we have to wait for server meshing to finally see the server tickrate reaching 30 fps ?

I’m not gonna say what changes are gonna be the thing that makes the servers hit a certain FPS. It’s so much more complicated than that, and guessing the FPS of a future version of the game where the engine works very differently than what we have now and the content we have is different than what we have now is a fool’s errand. I think server meshing will address one of the biggest issues with performance which is density of content, but it’s not issue we have with performance.

Or is there any other improvements planned before server meshing to be able to increase fluidity and decrease server load ?

As with any game, we need to spend time on performance, and big tech initiatives can help us make big leaps, but they aren’t going to be enough on their own, and we will always need to consider performance in all our systems in the game and work towards our performance goals. There’s still lots of places for us to make improvements, for example in AI, in the entity/component system, in physics, etc.. there’s wins to be had. When we get server meshing the density of content on a DGS will come down and these other issues will get highlighted even more, and then addressing those will have a more pronounced impact on performance. Performance is a tricky thing, and the solutions that get you from 10 FPS to 20 FPS are different than the ones that get you from 20 to 30 or 30 to 60 as every time you’re bringing that frame time down your time requirements for all your systems are also decreasing which means your problems are trickier and you’re needing to be concerned with more and more nuanced and specific issues. But again, it all starts with profiling and understanding the problem first, there is no optimization without context.

Originally posted by Delta Lima Thank you to … END_OF_DOCUMENT_TOKEN_TO_BE_REPLACED

Originally posted by Rasmus Kane So I just had … END_OF_DOCUMENT_TOKEN_TO_BE_REPLACED

Star Citizen Patch 3.9.1eAlpha Patch 3.9.1e has been released to PTU and is now available to test!   Patch should now show: VERSION 3.9.1-PTU.5250536.It is strongly recommended that players … END_OF_DOCUMENT_TOKEN_TO_BE_REPLACED

Originally posted by Dhansak I am about to buy … END_OF_DOCUMENT_TOKEN_TO_BE_REPLACED

Originally posted by Flakbatgaming MY TIME HAS COME! Go to … END_OF_DOCUMENT_TOKEN_TO_BE_REPLACED